Such was this year’s pre-Budget conviction that the Chancellor would increase UK fuel duty, many motoring campaign groups had already started their publicity to denounce the rises. This sentiment was also reflected in the UK fuel market, with many of the big diesel buyers frantically increasing their orders in the hope that they could “get-ahead” of the expected rise in costs. Therefore there was genuine surprise on March 16th, when the Chancellor announced that for the 6th consecutive year, there would be a duty freeze and that there would no fuel duty increases for another year at least.

Back in 1996, Portland was working on an assignment to evaluate the viability of a sea-fed oil terminal (depot) in the UK. The main focus of the project was the cost of working inventory and the following lines taken from the report’s introduction, illustrate the context of the exercise; “the investigation will look at whether duty bonded status will improve the long-term viability of the Terminal, now that higher duty rates are detrimentally affecting oil storage rates across the network”. The issue at the heart of the matter was the size of the depot’s fuel tanks and the resulting large quantity of stock that sat at the bottom of each tank (below the suction line), that never moved and thus could never be sold. As this inaccessible stock was duty paid (duty bonded status means duty free), the question was whether the increasingly burdensome working capital costs were now bringing the commercial viability of the depot into question.

In writing this report we had a look at duty rates back in 1996, to see what all the fuss was about. No doubt 20 years ago, fuel duty of 37 pence per litre (ppl) was seen as unacceptably high (partly one suspects because the fuel itself was only costing 9ppl!), but to the weary 58ppl duty payers of today, these lower figures seem pretty manageable. Not least because between 1996 and 2010, fuel duty rose on average by 1.5ppl each year and this led many motorists to believe that the British Government was deliberately targeting them and taking advantage of their “easy” tax status. 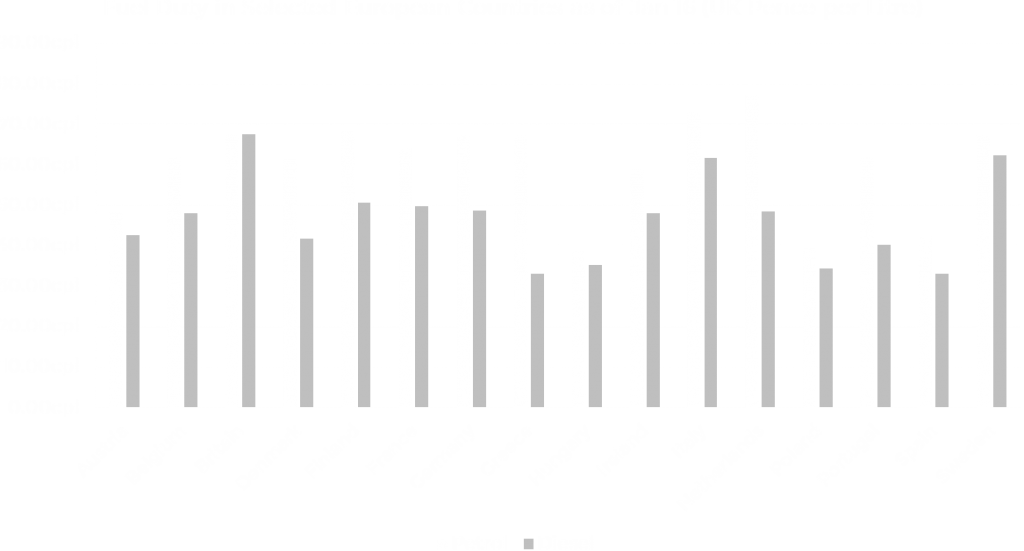 Fuel duty in Britain was first introduced in 1908, was scrapped after the First World War and then did not reappear again until 1928, when fuel usage was rapidly increasing (and the Government was broke!). For the next 60 years, duty rates generally ticked upwards, but very often remained static for long periods of time (the 1960’s virtually saw the same rate for the whole of the decade). But then in the 1990’s, successive Governments discovered the large and effortless riches that were available in raising tax on motor fuel. Whilst most people associate the much despised fuel duty escalator (whereby fuel duty rose above the rate of inflation) with recent Labour Governments, it was in fact Normal Lamont and the Conservatives who set the ball rolling in 1993; first with an eye-watering 10% duty rise, and then a Parliamentary Bill setting an annual 3% rise above the level of inflation.

Fast forward to 2010 and the UK comfortably had the highest fuel duty rates in Europe, although the duty freeze since 2010 has since enabled some of our European neighbours to “catch-up” (see graph). Contrary to popular opinion, Britain does not now have the highest fuel duty rates in Europe, with that honour being bestowed on our Dutch cousins. But the UK is certainly unique in that we apply the same duty rate for both petrol and diesel, whilst all other European countries apply a diesel discount to support their indigenous haulage industries. Britain does no such thing and this is much to the frustration of our truckers, particularly those in the South-East of England who have to compete with mainland European operators. Further salt is also rubbed into the hauliers’ wounds, when they look over their shoulders to their transport brethren in the bus industry, many of whom still receive a hefty 34ppl rebate as part of the Bus Service Operators Grant (BSOG).

But generous treatment by the Treasury is rare indeed, such is the importance of fuel duty revenue. On current fuel consumption, duty rates generate revenue for the UK of £28bn per annum and if you add VAT (just on the duty element), a further £6bn is added. For a Government trying to balance the books, this kind of revenue is impossible to forgo. Moreover, it does beg the question why the Chancellor did not take the opportunity this time around, to impose a duty increase on a fully expectant population. A 1ppl tax rise would have generated an extra £0.5bn revenue per annum and for motorists now paying 30ppl less for their fuel than 18 months ago, it is difficult to see that public opposition would have been anything other than fairly muted.

Finally a quick word on the 1996 oil terminal. It’s still going, although it never did get its bonded status. Perhaps the recipients of the report decided that in the long-run, 37ppl for fuel duty wasn’t such bad value after all!